Our story takes place in the last century in Hungary, in an epoch when the far right orientated teenagers were called skinheads. Our characters, who represent this section of society will not start to add racist comments or something like that, just like our adult characters who will choose their words and the time of their manifestations too.

Our protagonist is Kata, a 16 years old rebellion teenager who has to move from his wealthy environment to a housing estate full of obnoxious juveniles because of her parents’ divorce. It turns out that the initially scary guys help the fatherless girl in everything and every time. The three emotionally injured teenager with related faiths meet one another. They transform their injuries into untameable anger, and looking for irrational targets. The fight against the enemy becomes uncontrollable and demands more and more brutal means. 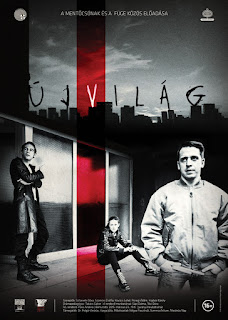 “It’s frightening to watch or look back from 2015 to this way: how becomes one million voters from a little assembly held in a cellar.” (Andrea Tompa, Magyar Narancs)
“New world” is a real problem-processing performance. Emotionally touching and intellectually provoking.”(Máté Pálos, Origo)


The 90 minutes performance is followed by a 45 minutes conversation with our student spectators.
The performance has minimal technical claims:
- a 11x6 meters space, no theatrical technique required
- approx. for 60 spectators
- cast on tour: 7 people
With subtitles or with simultaneous translation.