The piece is about the life of poor families living in small villages in todays’ Hungary. The families can only hope for income via aids, temporary jobs or illegal work – these are the resources our players have to meet ends with somehow. In this reality constructed by the play everyone becomes poor for an hour or two and will feel the excruciating feeling of standing out on their own skin. We use the emotional energy of the game so that the players would get a feel of the frustration of surviving everydays without work, money, or resources.

The residents of the village – played by the players – can make decisions. Do they want to work illegally, will they pay the electrical bill, and will they turn to the usury for a loan? If a player gets confronted with what alternatives one can choose from, if one is impoverished, what aid, or family allowance is enough for, they have a chance to choose solidarity instead of intolerance.

The audiences are made up of 10-15 people (who form and represent family units of 4 – parents and 2 children) have to make it till end of month on these resources. They move on fields representing the days of the month, while the actors manifest the prominent inhabitants of the village: the usury, the cop, the mayor, who directly talk to the audience. The audience has to make decisions on their spending and income, but naturally – as often in life indeed – accidental occurrences play a role as well…

SZOCIOPOLY came to life as a coproduction of Lifeboat Unit, and Chances for Children Association in 2014, with the directing of Gábor Fábián. We also play SZOCIOPOLY for adult audiences, and we also show it to 17-18 year olds in school theatres. 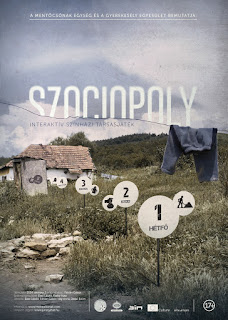 PHOTOS
"In this village, not only is time concentrated, but the twists are also dramatic: this is why it is theatre, for it is a concentrate and it is dramatic." (Andrea Tompa)
"This is a grand invention. Also as a social play, and also as a „theatre reality show”. I can only recommend it to everyone."  (Andrea Stuber)
"If I could, I would make Sociopoly obligatory to everyone."  (Judit Tóth)
"The actors made sure we saw everyday life situations, our vulnerabilities, our humiliation, with a real, numbing geniousity. We all change a little bit."  (Péter Rácz I. )